Although the Salem witch trials took place primarily in the winter and spring of 1692, and most of the tragic executions took place in the summer, I think the episode tends to come to mind for many New Englanders (including me) in the weeks leading up to Halloween. As the crisis grew, it impacted families well beyond Salem, even reaching out in a tenuous way to my neck of the woods–the South Shore of Massachusetts. And so, when considering the Witch Trials about this time of year, I often think of the peculiar case of Capt. John Alden.

Capt. Alden (c. 1626-1702) was the son of John and Priscilla Alden of the Mayflower. Raised in Duxbury, Plymouth Colony (now Massachusetts), Alden eventually moved to Boston and became a prosperous sea captain. Beginning in 1690, possibly earlier, Capt. Alden was in the service of Massachusetts Bay Colony during King William’s War (or the Nine Years War)–a series of raids and massacres back and forth between the English, the French and their Native American allies, primarily fought in what is now Maine, New Brunswick and Nova Scotia.

Alden’s role during the war was not that of a soldier but rather an emissary and agent for officials in Boston. In the course of carrying out his duties, Alden earned a dark reputation for playing both sides of the coin. From the summer of 1690 to the summer of 1691, Capt. Alden made at least four voyages to Maine and Acadia, ostensibly to gather intelligence as to the state of things along the frontier, to furnish supplies to English settlements, and to negotiate for the return of prisoners.[1] According to some, Capt. Alden was energetically engaged, at the expense of his official duties, in trade with the Native Americans and French.

Mark Emerson, a New Englander and prisoner-of-war, was bitter about Capt. Alden’s behavior. A captive of Native American allies of the French, Emerson was among those whose release Alden was supposed to be securing. Instead, as Emerson later alleged in an affidavit submitted to Massachusetts Bay officials, Alden flatly told Emerson he came “to trade and not to redeem captives.”[2] Emerson added, “…The Indians have a saying that Mr. Alden is a good man and loves Indians very well for Beaver, and hath been with them often…to their great Relief.” Two other English prisoners, held by the French, would later allege that Capt. Alden had promised goods to French forces in Maine.[3] It seems a somewhat hazy accusation and one can make of it what one will. Alden reacted to Emerson’s affidavit by suing him for libel–a case which the court in Boston dismissed.[4]

In August of 1691, Capt. Alden set off for Port Royal in Acadia (recently taken by the English) as part of a mercantile venture led by influential Boston merchant John Nelson. The company, of which Alden a was shareholder, had promised Massachusetts Bay officials that they would garrison vulnerable Port Royal in exchange for a trade monopoly there. On their way northward, Alden put in at Salem and attempted to recruit the crew of a local vessel, Endeavor, to join the expedition. Alden’s reputation had reached Salem and many of the Endeavor crew said that they would rather be hanged before they would go with him.[5] This was only six months before the witch hysteria broke out.

The Port Royal expedition was doomed to fail. A short time after they settled in at Port Royal, the English were intercepted at sea while on a trading excursion by a French frigate off the coast of St. John, New Brunswick on September 22, 1691. Capt. Alden was taken captive along with his son, John Alden, Jr., John Nelson, and the rest of the English crew. Capt. Alden was paroled and sent back to Boston to negotiate a prisoner exchange and raise a ransom. The French wanted 60 soldiers who had been taken during the 1690 Battle of Port Royal. Alden was only able to secure the release of six of them. The French, wholly unsatisfied, sent John Nelson and John Alden, Jr. to Quebec and then on to the Bastille in Paris. It would be years before they came home.[6]

A short time after returning to Boston from the unsuccessful, one might say calamitous, negotiations in Port Royal, Capt. John Alden received on May 28, 1692 a summons to come to Salem Village (now Danvers). He had been accused of witchcraft.

Capt. John Alden arrived in Salem Village as ordered and was examined on May 31, 1692. He wrote an account of how he was dealt with. According to Alden, he came, “upon the accusation of a company of poor distracted, or possessed creatures” and when he entered the meeting house, he was greeted with the spectacle of, “…those wenches being present, who played their juggling tricks, falling down, crying out, and staring in people’s faces.”[7]

The magistrates demanded of the girls who it was who tormented them. One of the accusers pointed several times at a Captain Hill, who was not accused. After this error had been made, according to Alden, “The same accuser had a man standing at her back to hold her up. He stooped down to her ear; then she cried out, ‘Alden, Alden afflicted her.’ One of the magistrates asked her if she had ever seen Alden. She answered ‘No.’ He asked her how she knew it was Alden. She said the man told her so.”

The man who whispered in the girl’s ear goes unnamed. But it is clear enough, from Alden’s point of view, that the girls were but puppets in the whole affair. The proceedings were then taken outside and a ring formed around Capt. Alden, presumably so that the girls might get a better look at him in the daylight. According to Alden, “…The same accuser cried out, ‘There stands Alden, a bold fellow, with his hat on before the judges; he sells powder and shot to the Indians and French, and lies with the Indian squaws, and has Indian papooses.’ Then was Alden committed to the marshal’s custody…” 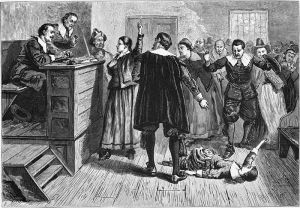 The Salem Witch Trials as depicted in 1876

Alden’s questioning later continued in the meeting house where he was made to stand upon a chair. The accusers cried out that Alden pinched them, even though he was not in reach of them. The magistrates ordered that Alden’s hands be held open by the marshal so that he could not pinch them by spectral means. Alden asked the magistrates why they would think he would come to Salem Village to torment strangers he had never seen before.

As it happened, Alden had an old friend among the magistrates, Bartholomew Gedney. Unlike Hathorne and Corwin, Gedney was not completely convinced by the girls’ antics. He wanted to help his friend but did not quite know what to make of the whole situation. He asked Alden to give glory to God. Alden responded, as he later wrote:

…He hoped he should give glory to God and hoped he should never gratify the devil, but appealed to all that ever knew him, if they ever suspected him to be such a person, and challenged any one that could bring in anything on their own knowledge, that might give suspicion of his being such an one. Mr. Gedney said he had known Alden many years, and had been at sea with him, and always looked upon him to be an honest man, but now he saw cause to alter his judgment. Alden answered, he was sorry for that, but he hoped God would clear up his innocency.

After some further antics, Capt. Alden was committed to a Boston jail where he languished for almost four months. By that time, the executions were taking place in Salem. Seeing they way things were going, Alden arranged his escape from prison. He fled to his hometown of Duxbury, arrived in the middle of the night and telling frightened relatives, “he was flying from the devil and the devil was after him.” They secreted him in some house and kept him hidden until the hysteria had been put to a stop. Only then did Capt. Alden return to Boston to turn himself in. No one appeared against him and he was discharged.

The fact that a seemingly random outsider had been accused by the Salem girls, a prosperous man from Boston, one with a reputation for causing trouble on the frontier, serves to demonstrate the political factors lurking behind the accusations. Alden’s activities, his alleged support of enemies whether unfounded or not, were a threat to the Puritan order of things in Massachusetts.