Oddly enough, as I’ve been doing a good amount of research on the Peninsular Campaign lately, I keep coming across the name of this vessel…the Elm City. Again and again, I find it mentioned in far flung sources, various regimental histories, Sanitary Commission letters, even a journal in the collection of the historical society where I work.

Her significance might at first seem trivial, but it seems this ship was all over the place during the Peninsular Campaign, transporting thousands of men, bringing them towards the front and then bringing the sick and wounded away from the Peninsula back to safety. As one of the larger steamships involved in the transport effort, she had a significant impact on the campaign and, I think, deserves a little attention. And so, I present here a sampling of excerpts from various sources, a patchwork which might provide a sense of the extensive service of the Elm City.

First, her origins…The Elm City was built in 1855 in New York for the passenger line between New York and New Haven. The latter place has long had the nickname, “the city of elms,” hence the name of the vessel. She was 300 feet long and designed to accommodate 350 passengers. She was commanded by Capt. J.M. Lewis. I find reference to Lewis still being in charge as of 1861 and I wonder if he remained in command when she was brought into army service. It seems likely to me that he did, but I do not know.

A prelude to her duty during the Peninsular Campaign was her occasional service, during 1861, in bringing new regiments towards the seat of war. The 6th Connecticut Infantry, for instance, in September 1861, was brought from New Haven to Jersey City on their way to Washington. Sgt. Charles Caldwell later wrote, “Handkerchiefs from the fair ones bid us adieu…together with the martial music from the band to increase enthusiasm made our departure from New Haven pleasant to contemplate…We embarked on the steamer Elm City and soon stretched ourselves on the several decks and in the cabin, glad enough for a chance to rest ourselves…”

At some point early in 1862 (I wish I knew when) the Elm City was placed under the control of the U.S. Army Quartermaster’s Department. General McClellan’s Peninsular Campaign got underway in March 1862 and the Elm City became one of the key transport ships bringing the Army of the Potomac down to Fortress Monroe, the staging point for the campaign.

Among the first units she transported in this campaign were the 3rd and 4th Maine Infantry regiments which embarked at Alexandria. Finally on the move, the men of the Army of the Potomac were full of excitement. Frederick Floyd of the 40th New York Infantry observed the great flotilla at Alexandria, noted the Elm City pass by, and later wrote, “On shore all was bustle and activity, and the numerous steamboats in the river made the scene very animating. The bands played patriotic tunes and the men cheered… It was a beautiful day, with the sun shining in all its magnificent effulgence, betokening a pleasant voyage to our destination, which we now knew to be Fort Monroe.”

On March 21, the Elm City transported the 18th Massachusetts Infantry from Alexandria to Fortress Monroe. During late March and early April, the vessel must have been going constantly to and fro, feeding new regiments into the campaign.

On April 3, Brigadier General  Dan Sickles embarked on the Elm City at Liverpool Point, Maryland. A man eternally embroiled in controversy, Sickles had just discovered that Congress had refused to confirm his commission as Brigadier General and his command of the Excelsior Brigade had been revoked. While on board the Elm City, Sickles penned an angry protest to his superior officer, General Joseph Hooker and wrote a farewell letter to his brigade. “…After a year of service with you, it is hard to yield to the necessity which separates me from so many brave and devoted companions-in-arms…White protesting that it is unlawful and unjust, I obey this command, because obedience to superior authority is the first duty of a soldier…” After months of protest, Sickles’s commission and brigade command would be restored in May.

On April 17, the Elm City transported General Philip Kearny and his New Jersey Brigade from the Potomac River to the Union trenches near Yorktown. The fiery Kearny, famous for his insubordinate outbursts, was eager to get into the fight (which at the time, with the Army of the Potomac entrenched outside Yorktown, wasn’t much of a fight). Kearny fumed as McClellan forced his brigade to remain on board the Elm City for days. Francis Colburn Adams of the 1st New York Cavalry later wrote, “The general’s impatience at being kept afloat in this manner found expression every day in language more emphatic than the rules of services warranted.”

After Yorktown was finally taken, the Elm City was busy transporting regiments from Yorktown to West Point Landing at the mouth of the Pamunkey River. These included the 22nd Massachusetts Infantry on May 8. Although the 22nd’s ride up the York River on the Elm City lasted only three hours, they were very glad for the rest after waiting a day in the streets of Yorktown in the rain for their turn to embark.

The Elm City’s most remarkable service began in mid-May when she was transferred to the United States Sanitary Commission. This revolutionary organization employed a large network of civilians, male and female, whose objective it was to support the Army Medical Bureau. One of the Sanitary Commission’s most remarkable projects was the outfitting of hospital transport ships to bring wounded men from the Peninsula to hospitals in Washington, Philadelphia, New York and elsewhere. The Elm City became one of these ships. It is sadly ironic that a vessel built for pleasure cruises would now be transporting men shattered by battle.

On May 14, the Elm City was loaded up with 440 wounded men and departed for Washington. One of the Sanitary Commission nurses, Katherine Wormeley, wrote with high praise of one of the nurses on board the Elm City, “Mrs. Griffin is magnificent at that. I never saw her hurried or worried for a moment…She spent this morning on the Elm City watching over three men until they died, receiving their last wishes, which she is now writing to their wives.” 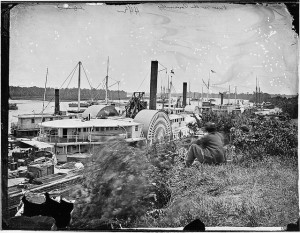 On June 27, after an untold number of voyages transporting the wounded, the Elm City was off of White House Landing. The place was, during most of the Peninsular Campaign, the main base of supplies for the Army of the Potomac. Previously a backwater, it had been transformed into a bustling river port. But on June 27, that all changed. On that day, with the Union defeat at Gaines Mill, General McClellan made the decision to abandon White House Landing and change his base to Harrison Landing on the James River. Everything at White House Landing was thrown into panic and chaos.

Katherine Wormeley wrote, “…General Porter, being flanked in immense force, has wheeled round and back…The whole army is now across [the Chickahominy] river; the enemy are in part on this side of it…The enemy evidently hope to ruin us by seizing this station…everything has been sent away; the few things that remain are lying on the wharves…The Elm City is waiting for the 93rd New York Regiment, which is stationed here on guard duty…even as I write comes the order to start, the enemy having got the railroad. And so rapidly have we gone, that between writing the words “Elm City” and “railroad” we are off! Such a jolly panic! Men rushing and tearing down to the wharves…The enemy are in force three miles from us; they have seized the railroad, and cut the telegraph.”

After this narrow scrape, the Elm City continued in service with the Sanitary Commission until the U.S. Army took control of the hospital ships. As the Peninsular Campaign came to a fruitless close, the Elm City was employed in transporting regiments off of the Peninsula and to Northern Virginia where a new campaign was commenced in August.

I wish I could say how many soldiers were transported aboard this hard-working steamship. The number must be in the tens of thousands. And how many lives were saved on her decks when she served as a hospital ship, we will likely never know. But certainly, the Elm City rendered tremendous service and played a significant role during the campaign.