Curse of the Tree of Knowledge, Duxbury 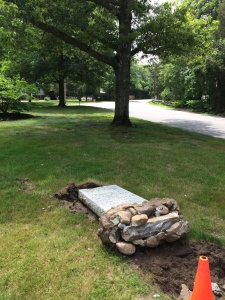 If one were superstitious, this fallen marker in Duxbury would be cause for alarm

There’s a spot in the seaside town of Duxbury, Massachusetts where two roads diverge. The corner has been marked and remembered for centuries due to superstition. According to long-standing legend, if the marker should ever come down, the whole of the town will be cursed.

In the late 17th century, the old highway from Boston to Plymouth (following more or less the same path as modern Route 53) skirted across the sparsely inhabited southwestern section of the small town of Duxbury. The village proper was and is located along the shore, about 2.5 miles from the corner in question. Coming south from Boston, post riders and, later, stagecoaches, reaching this fork in the road could steer to the left to head to the village of Duxbury (along what is now Elm Street) or to the right to continue on to Plymouth (along what is now South Street).

According to a fairly solid local tradition that goes back centuries, colonial post riders usually did not wish to make the detour to deliver mail all the way to Duxbury village, preferring to get on to their primary destination of Plymouth as soon as possible. And so, mail for Duxbury residents was often left in a large box at this corner which was nailed to an ancient oak tree. At some point someone cleverly called it the “Tree of Knowledge,” a spoof on the biblical tree, because the letters placed there brought news from the world outside the small village.

Justin Winsor (1831-1897) was the first to write about the Tree of Knowledge in his History of the Town of Duxbury, published in 1849. It was one of his first works, written at age 18. He would go on to become one of the nation’s leading historians, head of the Widener Library and the Boston Public Library and a founder of the American Library Association. Winsor wrote,

Here, at the junction of the road from Plymouth to Boston with the road from Duxbury, was the “Tree of Knowledge,” so called; and a box nailed to this was the depository for the Duxbury letters, many years ago, when a regular conveyance was established between Plymouth and Boston. Here the towns-people repaired to obtain their letters and papers, or some one was despatched to get them and distribute them. The mail was afterwards conveyed here to meet the Plymouth stage for Boston…A guide-board is now standing on the place where the tree stood, bearing a representation of it.[1]

Winsor did not elaborate in print on the reason behind the placement of the sign bearing a representation of the tree. This was left to Wendell B. Phillips (a distant cousin of his namesake, the famed abolitionist and orator) who privately published a dramatic poem for his friends around 1915.

Phillips was a selectmen of Duxbury for more than twenty years during the early 20th century and lived on Winter Street, not far from from Tree of Knowledge Corner. He was well versed in the lore of the neighborhood, his family having lived there for generations. His poem is not exactly Shakespeare, but it tells a dramatic story of the venerable tree which served the town for generations. According to Phillips, a great storm one night raged over Duxbury, and, precisely at midnight, a tremendous bolt of lightning struck the Tree of Knowledge, tearing it asunder and shaking the surrounding neighborhood. In the morning, the remains of the tree were found by the side of the road.[2]

The poem goes on to tell of an elderly man in the neighborhood who had a vivid dream in which the spirit of the Tree of Knowledge spoke to him,

“See that thou markst the spot,
See that I’m not forgot,
Else cursed should be thy lot.”
The form then faded.
And while the sign stands there,
Bearing the legend fair,
Tended with loving care,
No curse we’re dreading.[3]

Setting Phillips’s melodrama aside for the moment, we might assume based on other sources that the Tree of Knowledge came down around the time of the Revolution or perhaps slightly after. There’s really no evidence that it was destroyed by a lightning strike (more likely, it simply died) but there is no denying that residents of the surrounding neighborhood (which had come to be known as Tarkiln) took the superstition seriously. Phillips asserted that his grandfather, Augustus Phillips, remembered the spot being marked as early as 1818.[4]

Generation after generation continued to maintain a sign at the spot through the 19th century. Some iterations were a simple panel with a crude depiction of the tree and probably words to the effect of “Here stood…” Two versions were made by Mrs. Lucia Alden Bradford Knapp of Plymouth. One of the more elaborate markers, placed in the early 20th century and painted by Fanny Burns Clark of South Duxbury, depicted a rural scene with a stage coach stopped in front of the tree.[5]

This marker occupied the site until 1923 when the Commonwealth set about widening the road to accommodate motor traffic. A writer from the Boston Herald described the considerable anxiety in the neighborhood due to the absence of the sign. Lowell Ames Norris wrote,

To the outside world, this may sound like an idle tale, but it seems very real to the residents of Tarkiln and especially to Harry A. Randall of Kingston, who has acted as custodian of this sign for the past 30 years, just as his father acted in a similar capacity before him for an equal period. To be sure, there remains little superstitious dread, but a custom of almost two centuries is not to be regarded lightly…’Folks in these parts think a lot of that sign,’ said Mr. Randall to the Herald Man. ‘That spot has been marked longer than anyone can remember…’

Much to the relief of residents, when the road construction was completed, the wooden sign was replaced by the Duxbury Rural Society.

In 1937, during the town’s Tercentenary Celebration, it was determined that large granite markers should be placed about town locating certain sites of historical interest. The Tree of Knowledge was chosen as one of those sites. As Reuben Peterson, the chairman of the markers sub-committee wrote (presumably with tongue in cheek), “While the members of the Tercentenary Committee cannot be said to be superstitious, it is just as well to be on the safe side. Thus the site of the Tree of Knowledge will be marked in granite, with a suitable inscription on both sides…And it is hoped that the curse will be averted for the next 300 years.”[6]

And so the sturdy marker has stood…until this week when it was struck by a car and toppled. I imagine it will be righted by the town very soon, but I wonder if there are any in the neighborhood who feel a bit unsettled with the sign down. I suppose, technically, the site is still marked even if the marker is lying on its back. Let’s hope that will be sufficient for the old Tree of Knowledge.