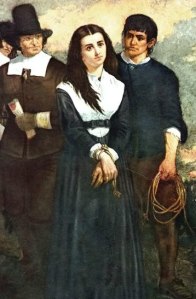 I have mentioned my interest in the Salem Witch Trials of 1692. Last time I was in Salem, I visited a site that has made a long-lasting impression on me. I arrived armed with a copy of a rare map and a determination to find a very specific historic site. I wanted to see the spot where the victims were hung.

Sounds grim, I suppose. But I have no fascination for the macabre, honestly. My desire to find the site sprang from the same sentiments that move me to seek out regimental monuments, memorials and grave sites of people who have made history. I wanted to pay my respects.

There is a beautiful memorial to the victims of the Witch Trials in downtown Salem, built in 1992. It is a poignant and appropriate place to remember not just the 20 who were killed, but the 150 or so who were imprisoned. Still, that memorial doesn’t quite cut it for me. I have a thing about finding specific locations…the exact ground…where monumental things took place. The more remote and obscure the location, the better. Plus, I happened to be acting as historical guide to a group of friends on this trip, and I wanted to be sure that they managed to see someplace that most visitors rarely saw. Someplace hidden and forgotten.

In 1888, antiquarian Samuel Adams Drake wrote about a location outside of Salem known as Gallows Hill:

Just out of the city, on its southern skirt…an uncouth heap of steep-sided gray rocks, moderately high, on whose windy summit a few houses make a group of dusky silhouettes. This is a sort of waste place, good neither for planting, grazing, or building…Travelers look listlessly, and turn away. Yet stay a moment! Long ago, so long that no living man remembers it, one solitary tree grew upon that rocky, wind-swept height…Those cold gray ledges where it stood is Gallows Hill. The tree, tradition says, was that upon which the condemned witches were hung. From the moment of passing this fatal place, neither the noise nor the throng will be able to distract the stranger’s thoughts, wholly occupied as they are with the sinister memories that the sight has awakened within him.

So, I am not the only one whose thoughts have been “wholly occupied” with the sinister episode that took place on Gallows Hill. The place has been so called for a long, long time. If visitors looked listlessly at the rocky hill in 1888 and nonchalantly passed by, now most do not even look at it.  Zipping by the location on Boston Street (Route 107), there is nothing about the hill at all that would attract attention. It is mostly a residential area now. And a Walgreens sits right at the base of the hill. No windy summit or dusky silhouettes to be seen. Just suburban sprawl.

On one of my first trips to Salem, many years ago, I drove up Gallows Hill to get a look at what might be there. Oddly enough, the top of the hill features a recreation area known as Gallows Hill Park complete with a playground and ballfield. I expected to see some kind of tablet dedicated to the women who died there. Instead I saw kids scampering around and moms pushing strollers. It was…weird. And although long-standing tradition indicated that the tragic executions took place at the summit of Gallows Hill, something about the site just didn’t seem right.

Later, when planning for this trip to Salem during which I would act as a tour guide of sorts, I wanted to do some serious preparation. In researching, I came across, in various electronic publications, a map depicting Salem in 1700 drawn by historian Sidney Perley around 1921. The purpose of Perley’s map was to pinpoint, based on decades of research, the location of the executions and the unmarked graves of the victims. The summit of Gallows Hill, Perley argued, was not where the victims were hung. Based on a variety of intriguing facts, Perley insisted that the actual site was near the base of Gallows Hill, on a rocky ledge then overlooking the North River.

There are several things about his argument that just ring true. The ledge at the base of the hill was just on the other side of the bridge crossing the North River, that is, just outside of Salem limits. (There’s no bridge now…the area has all been filled in). Sheriff Corwin had orders to conduct his grim business outside of Salem. It seems reasonable that he would choose a spot just over the town line and not go any further than he had to. Also, we know the victims were brought to the location by cart. The summit of Gallows Hill would have been a very difficult place for a cart to access.

Armed with Perley’s research and map, my friends and I tracked down the spot. After a long day of touring, it was dusk by the time we got there. The location is on a residential side street, which was depicted as an old cart path leading to the ledge on Perley’s map, now known as Proctor Street. The houses there are closely packed. However, on this well-populated street, there was a large, vacant parcel overgrown with trees.

I have to admit this was one of the most haunting spots I have ever visited. A rocky patch of woods in the middle of a neighborhood. No markers. No monuments. But something about it just seemed fraught with historic significance. Looking at the boulders strewn about, it was possible to imagine that these were the same rocks on which the crowds stood to watch the “witches” executed. Its obscurity and anonymity only added to the eeriness of it all. The site still hasn’t been built upon despite the significant development of the area. It seemed almost intentionally foresaken.

Perley’s argument has been around for nearly a century. And, recently, it has been gaining traction. Increasing numbers of people visit the site and in 2008 Perley’s theory and the story of the mysterious wooded ledge was written up by Daniel V. Bourdillion in Weird Massachusetts.

Despite what might be called increasing consensus, it seems impossible that the hidden location will ever become a protected historic site. Perhaps it’s for the best. When I was there, I had the distinct impression that the victims would have preferred the site of such tragedy and disgrace be forgotten. Shortly after having found what I had long been looking for, I was eager to leave.

[Update, January 2016: Apparently my prediction above, that Proctor’s Ledge would likely remain relatively ignored, was incorrect. A group of scholars has been researching the site and a project is underway to place a marker or memorial there. You can read more here.]