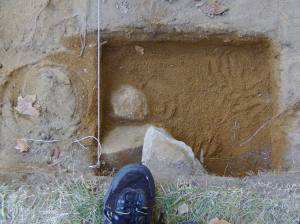 On my desk at work there’s a rock. Not too big. About palm sized.  Makes a good paperweight, which is what it does most of the time, holding down a small stack of phone messages. Everything has to be pinned down lately because it’s so bloody hot and all the fans are on full blast. The second floor of the 19th century building that serves as our office gets to be like an oven. And air conditioning is not an option.  I really hate summer.

At any rate…the rock. Two years ago I was involved in an archaeological dig. We were looking for what was left of a 300 year old building. Tradition said it was on a certain spot. But there was really only one way to be sure. Dig. And we found it just a few inches down.  Bricks and mortar, glass and plaster, nails and more nails. But the part that really amazed me was the foundation. Apparently, the bigger stones had been taken away and used elsewhere.  Yankee frugality. But a perfect line of smaller stones was left over, forming a neat rectangle. Scores of them. We kept a bunch. Not that a rock is really as interesting as a man-made artifact, but still.

So, one of them sits on my desk. And every now and then I marvel at the fact that someone wedged this little stone into place while building a foundation 300 years ago. I really don’t mean to attribute too much significance to a rock, but it does make you wonder. Who built that foundation? What did he look like? And what was he thinking about when he casually grabbed this stone and dropped it wherever he thought it belonged?

It never could have occurred to him that it would be on someone’s desk in three hundred years, next to a laptop. But there it sits. Connections are fascinating if you stop to think about them. I don’t know that builder, and he didn’t know me. And yet, we have this funny sort of link. Through a stone that’s now a paperweight.

I am a historian of the Civil War Era, author, and PhD candidate END_OF_DOCUMENT_TOKEN_TO_BE_REPLACED
This entry was posted on Wednesday, September 1st, 2010 at 5:24 pm and tagged with American History, archaeology and posted in American Colonial History. You can follow any responses to this entry through the RSS 2.0 feed.
Winslow Homer’s “Veteran in a New Field” »