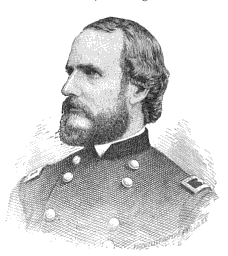 I am eagerly anticipating the release of the latest movie directed by Robert Redford–“The Conspirator,” based on the trial of Mary Surratt, the only female conspirator in the Lincoln assassination. It has been quite some time since a good Civil War era movie hit the big screen. And what better time for a resurgence of interest in the Civil War (we hope) than the 150th anniversary of its commencement? The movie appears to have a very strong cast. Let’s hope it doesn’t disappoint.

Hearing about the “The Conspirator,” I was immediately reminded of a general from Massachusetts who was involved in the trials. I highly doubt he will be represented in the movie but, based on what I saw in the trailer, the principles for which he stood are certainly represented as a major theme.

Massachusetts has a proud history of service in the Civil War. Nearly 160,000 Bay Staters answered Lincoln’s call. Massachusetts was a huge supplier of war materiel through the Springfield Armory and the Ames Foundry. Leaders of relief efforts such as Dorothea Dix and Clara Barton came from Massachusetts. And we had Gov. John Andrew, probably the most ardent and energetic of Civil War governors.

But when it comes to general officers, Massachusetts comes up a bit short. Our most prominent generals, Joseph Hooker, Benjamin Butler and Nathaniel Banks were…controversial to say the least. Unfortunately, some of our better generals are not so well known. One of them was Cyrus B. Comstock.

Comstock, born in Wrentham, Massachusetts in 1831, became a career soldier. He graduated West Point first in his class in 1855 and was assigned to the Army Corps of Engineers. At the start of the Civil War, he was a First Lieutenant serving as assistant to Brigadier General John Bernard (also from Massachusetts) who was in charge of building fortifications around Washington, D.C. In June 1862, Comstock became Chief Engineer of the II Corps and by November 1862 he was promoted Chief Engineer of the Army of the Potomac…just in time for the Battle of Fredericksburg.

Those familiar with the battle know of the infamous debacle with the pontoon bridges…a nightmare which Comstock had to personally straighten out. Due to bungling by the War Department, the pontoons did not arrive at Falmouth, Virginia at the same time as the Union army. Thus the army was delayed in crossing the Rappahannock for a month, completely losing the element of surprise and allowing the Confederates an opportunity to give them a terrible beating at Fredericksburg. When the material for the bridges finally arrived, Comstock himself led the 50th New York Engineers and oversaw the dangerous work under enemy fire.

This episode notwithstanding, the career of an army engineer was not usually characterized by the same sort of dash and glory one would see on the battlefield. An engineer’s victories come through planning, logistics, and careful construction. Still, Comstock, highly competent engineer that he was, did have an impact on battlefield tactics. During the Battle of Chancellorsville, for instance, the Army of the Potomac might have been utterly wiped out had not Comstock provided them an escape route via numerous pontoon bridges at various rivers and streams.

Comstock was transferred to Mississippi during the latter part of the Siege of Vicksburg and helped bring about the surrender of that all-important final Confederate stronghold on the Mississippi. It was there that his efforts caught the attention of Gen. Ulysses Grant. When Grant was transferred east, taking command of Union forces, he appointed Comstock his senior aide-de-camp. In this capacity, Comstock played a pivotal role in guiding the movements of massive numbers of troops during the Overland Campaign.

By the end of the war, after numerous commendations and promotions, the former Lieutenant Comstock had risen to Brevet Major General.

The episode of his life that I find the most interesting, and the most telling of his character, took place immediately after the end of the war with the tragic assassination of President Lincoln. All but one of the conspirators were swiftly arrested. Secretary of War Stanton (who for some time after the assassination was the de facto commander-in-chief) wanted a rapid trial in a military court. The nation needed to feel a sense of justice and closure and they needed it fast.

Historian Roy Z. Chamlee, Jr. is one of very few to bring to light Comstock’s moral conundrum during the trials in his book Lincoln’s Assassins: A Complete Account of Their Capture, Trial, and Punishment. As Chamlee relates, Comstock, still serving as Grant’s senior aide, was chosen to act as one of the military commissioners who would preside over the trials. When he heard of the assassination, Comstock privately wrote that “death is too good” for the conspirators. However, after his first day on the commission, he had a change of heart. He wrote in his diary that evening, “Wish I could get off. They ought to be tried in a civil court.”

The Judge Advocate General of the Army, Joseph Holt, was operating very much according to Secretary Stanton’s wishes, organizing the trial in a fashion that would be most convenient for the prosecution. During the first day of the trial, Holt spelled out to the commission exactly how the process would run. Several aspects disturbed Comstock and, being the no-nonsense general that he was, he spoke right up. The accused were civilians and should not be tried in a military court. Further, the closed and secret proceedings were highly improper and could easily lead to false testimony if witnesses were not publicly accountable. Having seen Grant and Stanton lock horns on occasion, Comstock knew how Stanton operated and could see was he was about. Another of the commissioners, Gen. Horace Porter, echoed Comstock’s objections.

The next day, Comstock and Porter reported to the courtroom to find that they had been excused from service on the commission. Secretary Stanton explained that, because Grant had been one of the targets of the plot, and because Comstock and Porter were both close with Grant, they could not be counted upon to act impartially. A bogus excuse, but Comstock was relieved all the same.

I have to admire Comstock’s position. Like Comstock, I have little sympathy for the conspirators. But they ought to have been allowed a fair, civilian trial. Comstock’s pointing out the questionable constitutionality of the trials took a great deal of courage.

From what I understand, this is a prominent theme in “The Conspirator.” I do hope they do a good job with it!

This entry was posted on Monday, February 7th, 2011 at 4:48 pm and tagged with "The Conspirator", American Civil War, Cyrus B. Comstock, History, Lincoln assassination, Mary Surratt, Wrentham Massachusetts and posted in American Civil War. You can follow any responses to this entry through the RSS 2.0 feed.
« Watson’s Hillside, or, Thoreau Strolling My Neighborhood
Robert Frost and Kindred Spirits Beyond Our Reach »