[In anticipation of the 150th anniversary of the Battle of Gettysburg in July 2013, I continue my series of articles devoted to the experiences of Massachusetts units at Gettysburg.] 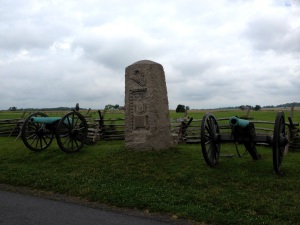 The 9th Massachusetts Battery monument on the Wheatfield Road near the Peach Orchard marks their first position during the battle on July 2.

The story of the 9th Massachusetts Battery at Gettysburg is probably the best known and most often recounted of all the Massachusetts units in that battle. It is one of those war stories that is more amazing and horrifying than anything that could be invented in fiction.

During the Battle of Gettysburg, the 9th Massachusetts Battery was part of the 1st Volunteer Brigade (McGilvery) of the Army of the Potomac’s Artillery Reserve (Tyler). They were ordered to support the III Corps near the Peach Orchard. It was the unit’s first time in battle.

The 9th Massachusetts Battery was organized in July and August 1862. They departed Boston for Washington on September 3, 1862. The unit spent the fall and winter of 1862-1863 in various positions on the outskirts of Arlington, Virginia as part of the defenses surrounding Washington, D.C. During this time, they drilled vigorously in field artillery tactics. On April 17, 1863, they moved to Centreville, Virginia and would be stationed there until the Gettysburg Campaign.[1]

At the end of February 1863, the 9th Battery received a new commander appointed by Governor John Andrew. The battery’s first commander, Captain Achille De Vecchi, was on leave from the Italian army and looking for an opportunity to distinguish himself as a model artillery officer. He knew his drill, but his habits were so foreign, his demeanor so formal, and his English so broken that his Massachusetts men ridiculed him in secret. To make matters worse, De Vecchi seemed determined to keep his battery within the Washington defenses and not in the field, which ran contrary to the expectations of officials back in Massachusetts.[2]

The new commander was 22 year-old Captain John Bigelow of Brighton, Massachusetts. At the start of the war, Bigelow was a senior at Harvard. He was the first of his class to enlist.[3] He signed up as a private with the 2nd Massachusetts Battery and was soon was promoted to lieutenant. In December 1861, he resigned his position and became the adjutant of the 1st Battalion of Maryland Artillery. With that unit, he participated in the Peninsular Campaign. During the Battle of Malvern Hill on July 1, 1862, he was seriously wounded…his left arm shattered. It was not until the fall of 1862 that he was able to rejoin his unit and was present for the Battle of Fredericksburg. About that time, he contracted malaria and was forced to return to Massachusetts for the winter to recuperate.[4] 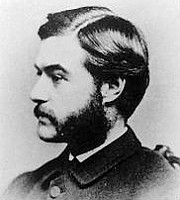 By February, Bigelow was feeling well enough to seek a new commission. Governor Andrew asked him to replace the troublesome De Vecchi and Bigelow went to the State House to discuss the appointment. Andrew told him, “‘Well, Bigelow, you see I need your assistance…[the 9th Battery] have been unfortunate in their commanding officer…They have caused me great anxiety and annoyance; you will find them thoroughly demoralized; they require an officer of experience; they need discipline; your work will be difficult.”[5] When Bigelow arrived to take command of the 9th Massachusetts Battery, he instituted changes in drill, inspection, daily routines, and particularly in making certain the men were better fed. The improvement in morale and efficiency was almost immediate.

On June 15, still encamped at Centreville, the men of the 9th Massachusetts Battery saw a growing cloud of dust to the southwest. This was the first indication they had that the infantry was on the move. Soon thousands of men of the XI Corps marched right through Centreville and the 9th Battery learned that they were to be swept up with the Army of the Potomac in the pursuit northward. The men of the 9th Battery were green to marching and it was difficult going.[6]

By June 30, 1863, the 9th Massachusetts Battery was in Taneytown, MD, about 14 miles away from Gettysburg. They camped there until the morning of July 2. They knew on July 1 that a battle was underway and the rumor was that there would be plenty more fighting. They reached Gettysburg about mid-day on July 2 and went into park with the rest of the artillery reserve near George Spangler’s farm east of the Taneytown Road and just south of Granite Schoolhouse Lane. There were a few hours to rest, water horses and feed men.

Around 4 pm, as Longstreet’s assault began on the left of the Union line, hitting the Union III Corps hard,  a message came from the commander of the III Corps artillery brigade, Capt. George Randolph, requesting two batteries to come to his support. The order was passed to Capt. Bigelow to move to the front. The 9th Massachusetts Battery soon found themselves moving westward along a lane past the Trostle Farm. Then a left turn through a gate, across a field to the Millerstown Road (now the Wheatfield Road). All around, the men of the III and V Corps were already engaged. The sights and sounds of battle were unnerving to many of these untried men of the 9th Battery. 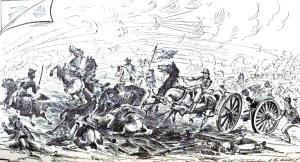 But there was not much time to think about it. Bigelow gave the order, “Forward into line, left oblique! Trot! Action front!” The 9th Battery deployed under Confederate artillery fire along the Wheatfield Road about halfway between the Peach Orchard and the Wheatfield, roughly 200 yards behind the infantry line. They took into battle 110 men, 6 twelve pound Napoleons, and 88 horses.[7]

They were ordered to shell Rose’s Farm and Woods. According to the battery’s historian, their fire was effective. Baker conjectures that the heavy casualties due to artillery fire reported by the 50th Georgia in Rose’s Woods coincide with the time and place of the 9th Battery’s fire. About 400 yards to the battery’s left and front stood Stony Hill where Tilton’s Brigade of the V Corps (including the 18th and 22nd Massachusetts Infantries) were attempting to made a stand against assaults by Kershaw’s South Carolina Brigade. The fire of the 9th Massachusetts Battery greatly aided the Union men on Stony Hill in holding that place for as long as they did.[8]

When the III Corps units in the Peach Orchard (on the battery’s right) and the V Corps units on Stony Hill (on the battery’s left) eventually gave way and retreated, the 9th Massachusetts Battery found themselves badly exposed. Kershaw’s and Barksdale’s Brigades bore down on them, and the 9th Battery continued to fire into the Confederates’ lines as they paused to reform.

At this point, Lt. Col. McGilvery appeared, telling Bigelow, “[You] are alone on the field, without support of any kind! Limber up and get out!”[9] Noting the proximity of the Confederates, Bigelow replied that he did not have time to limber up but would retire by prolong (pulling the cannons to the rear with men rather than horses). They retired back across the field towards Trostle’s Barn, almost 400 yards away, firing as they went.

Bigelow later wrote, “I say my battery retired by prolonge [sic]. I should perhaps more properly say by the recoil of its guns, for the prolonges were only used to straighten the alignment.”[10] After what must have been a harrowing dash across that field, loading, firing, and pulling the guns as they went, the 9th Battery took up a position in the farmyard adjacent to Trostle’s Barn. Bigelow found they had bought themselves a bit of breathing room, perhaps just enough time to get the guns limbered up and carried to the rear at a gallop. He gave the order to limber up.

Then Lt. Col. McGilvery appeared again and delivered what must have been a sickening order. There was a wide gap now in the Union line. McGilvery, an officer who acted decisively in a key moment, intended to fill part of that gap with reserve artillery batteries. But he needed time to get them deployed. Bigelow’s 9th Massachusetts Battery would buy that time while other batteries formed 500 yards to their rear. “Captain Bigelow,” McGilvery said, “there is not an infantryman back of you along the whole line from which Sickles moved out. You must remain where you are and hold your position at all hazards, and sacrifice your battery, if need be, until at least I can find some batteries to put in position and cover you. The enemy are coming down on you now.”[11] 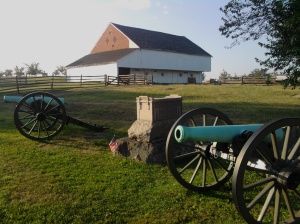 Secondary monument to the 9th Mass marks where they made a stand and were overrun on the Trostle Farm. 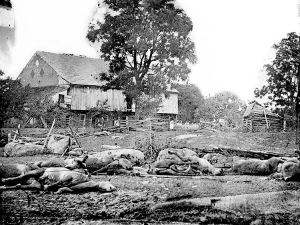 Wreckage of the 9th Mass Battery at the Trostle Farm shortly after the fight.

Preparing to make a stand to the last, Bigelow posted his guns in the farmyard, ordered ammunition piled by each piece and had them load with double canister. It was only moments until the Confederates were virtually on top of them. The regiment that happened to end up directly in their front was the 21st Mississippi of Barksdale’s Brigade. When canister blew huge gaps in their lines, the 21st Mississippi staggered back, reformed and came on again. Then again, and again. The 9th Battery soon ran out of canister and began using shell with the fuses cut short to burst at close range.[12] They expended over three tons of shot and shell, including 92 rounds of canister.[13]

Whitelaw Reid, a correspondent for the Cincinnati Gazette, was close enough to observe the contest between the 21st Mississippi and the 9th Massachusetts Battery. Describing the scene, he wrote: “Reserving his fire a little, then with depressed guns opening with double charges of grape and canister, he smites and shatters, but cannot break the advancing line…On, still onward comes the artillery-defying line, and still [Bigelow] holds his position. They are within six paces of the guns–he fires again. Once more and he blows devoted soldiers from his very muzzles…They spring upon his carriages and shoot down his forces.”[14]

The battery was overrun. Some 80 horses were killed or disabled and 27 men killed or wounded. The remaining men managed to pull two guns to the rear but four were abandoned. Some of the men fought their way to the rear using artillery rammers and sponge rods. Capt. Bigelow was shot twice. The battery’s bugler, Charles Reed, picked the captain up and brought him to the rear, earning Medal of Honor for doing so. Bigelow would survive. The 9th Massachusetts Battery bought about 30 minutes for McGilvery, enough time for him to get his artillery into place. The Mississippians took one more of the batteries before they were done, but eventually they were spent, without support of their own, and retreated.

The next day, the remains of the 9th Massachusetts Battery were posted in Ziegler’s Grove at the base of Cemetery Hill. Lieutenant Richard Milton, the only officer still standing, was now in command. With but two guns, the battery was lightly engaged during Pickett’s Charge. Their third monument on the Gettysburg battlefield in located in Ziegler’s Grove on their final combat position.

In 1885, when the three battlefield monuments of the 9th Massachusetts Battery were dedicated, then 44 year-old Major Bigelow gave an address. He recounted in detail the experiences of the battery at Gettysburg. He stated that the battery had suffered the second highest casualties of any artillery unit in the war. “Yours,” he said, “is a spirited and glorious record, and it is my proudest recollection to have been with you.”[15]

This entry was posted on Sunday, June 23rd, 2013 at 12:24 pm and tagged with 9th Massachusetts Battery, American Civil War, American History, Battle of Gettysburg, Freeman McGilvery, Gettysburg, History, John Bigelow, Trostle Farm, U.S. History and posted in American Civil War. You can follow any responses to this entry through the RSS 2.0 feed.
« 22nd Massachusetts Infantry at Gettysburg
Irish-Americans and the Boston Draft Riot, 150 Years Ago »