Colonel Clark at the Battle of Chantilly

In honor of the 150th anniversary of the Battle of Chantilly, I am re-posting an article I wrote on the subject a couple years ago. This little-known battle was the worst fight of the war for the 21st Massachusetts Infantry. 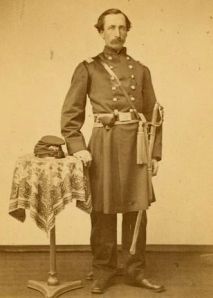 When I was in grad school at UMass Amherst I did one of my half-theses on Col. William Smith Clark who led the 21st Massachusetts Volunteer Infantry through much of its service. (After he resigned from the army in 1863, he came home and essentially became the founding father of UMass Amherst…but that’s a different story).

Battle of Chantilly, Virginia, September 1, 1862. The Second Battle of Bull Run had just been fought the day before and the Union army was in full retreat towards Washington. Lee’s Confederate army is in full pursuit. In fact, Jackson’s Corps of rebels has managed to get around the Union right flank and is on the verge of getting between the Union Army and Washington. This would be bad. To deal with the flanking maneuver, Pope sends a handful of Union brigades northward to deflect Jackson. Col. Clark’s 21st Massachusetts was part of this.

A wee bit of background on Clark. He had been a professor of chemistry at Amherst College prior to the war. When the war broke, he eagerly recruited college students. Felt very strongly about crushing the rebellion. In his letters, he comes off a bit brash and, at the same time, a bit naive about what war would be like. But they all were, really. Despite this, I have always respected his powerful sense of duty, his love for the Union, and his frequently demonstrated bravery on the battlefield.

As the 21st Mass deployed near Chantilly plantation, they were ordered into some thick woods and Clark was told to support the 51st New York which had gone into the woods ahead of them. Just as they entered the woods, a wild thunderstorm broke. Moving through dense brush and trees, blinded by rain, the 21st soon, unknowingly, drifted to the left and into a place where they should not have been. Seeing a body of troops ahead, Clark assumed it was the 51st and ordered his men to halt. He sent an officer forward to verify that this was the 51st, but before this could be ascertained, the regiment in their front, who were in fact Confederates, unleashed a devastating volley on the idle 21st. The casualties and shock were terrible. Clark ordered a retreat.

No sooner were they out of the woods when Gen. Phil Kearny rode up to the 21st and demanded that they fill a gap in the center of the Union line. Clark protested. Their ranks were shattered, their weapons fouled by the rain. They could do very little. Kearny, legendary for his hot temper, re-phrased the order in characteristically blue language. Clark moved his regiment to the center and deployed skirmishers. The skirmishers soon came under fire as they approached the woods and Clark halted his regiment.

A lithograph, “The Gallant Charge of Gen Kearny.” Although the unit behind him is not identified, the 21st Massachusetts was very close to Kearny when he fell.

Now infuriated, Kearny rode up to Clark and demanded to know why he wasn’t advancing. Clark informed him that the woods were full of Confederates. Kearny told him to move his regiment instantly and, to prove there were no rebels in their front, he rode his horse right for the treeline. And was shot.

Clark found himself standing alone when every man in arm’s reach was shot dead. Realizing that running to the rear was suicide, Clark decided to run straight at the rebels. He received two bullet holes in his coat and one through his cap. But he managed to smash through their lines and kept on running.

He was lost for four days in the Virginia countryside and subsequently reported dead. His obituary was printed in Amherst, “Another Hero Gone.” His wife telegraphed the army asking for his body to be returned home. Apparently, Clark arrived back with his regiment in Alexandria, Virginia not long after this telegraph came in. He composed a short reply, “Still have use for body. Will bring it back in person.”

His photo is on the wall of my study. For a great many reasons, Clark has been a hero of mine for a long time.

I am a historian of the Civil War Era, author, and PhD candidate END_OF_DOCUMENT_TOKEN_TO_BE_REPLACED
This entry was posted on Saturday, September 1st, 2012 at 10:09 am and tagged with 21st Massachusetts Infantry, American Civil War, American History, Amherst Massachusetts, Battle of Chantilly, History, Philip Kearny, U.S. History, University of Massachusetts Amherst, William Smith Clark and posted in American Civil War. You can follow any responses to this entry through the RSS 2.0 feed.
« Steamship “Elm City,” A Civil War Work Horse
Monmouth Battlefield: Just Me and the “Ghosts” »

4 responses to “Colonel Clark at the Battle of Chantilly”