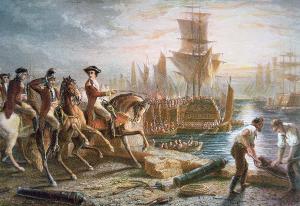 This being the eve of Evacuation Day, I thought it might be appropriate to write a bit about one of my favorite artifacts (one that pertains to Evacuation Day) in the collection of the Duxbury Rural and Historical Society where I work. Frequent readers of this blog will know that I generally focus on my personal connections to and reflections on history, and do not usually write about professional projects or artifacts. In this case I must make an exception as I feel this object is so intriguing.

Those outside of the Boston area may not be familiar with Evacuation Day. It is very much a local tradition. On March 17, 1776, the British forces that had occupied Boston for years, and had been besieged by provincial militia and the Continental Army for nearly a year since the outbreak of war, finally abandoned Boston, boarded ships, and departed for Nova Scotia. This victory, the first major strategic victory of the war for the Americans, was made possible by a bold maneuver…the fortification of Dorchester Heights on March 4, 1776.

In May of the previous year, American forces had captured Fort Ticonderoga on Lake Champlain, some 300 miles from Boston via the twisting, back-country roads of western New England. It was Colonel Henry Knox, Washington’s chief of artillery, who first suggested to General Washington the notion of bringing the captured artillery from Fort Ti to Boston. Knox was a Boston native and book seller who, although being bookish and scholarly, was also a big man and quite a brawler in his youth. The Americans desperately needed such artillery to break the long siege. And so, from December 1775 to March 1776, this desperate measure was undertaken. Knox and his men hauled 60 tons of artillery over the rugged Berkshires, through swamps and along crude roads. It was a truly staggering accomplishment.

The route that Knox’s expedition followed is now marked through New York and Massachusetts and known as the Henry Knox Trail. I’ve long had it on my list to visit Fort Ti, and when I eventually head out there, I intend to follow that trail.

As soon the cannon arrived, Washington put them to good use. Placing a few in Cambridge, to the northwest of Boston, he ordered the bombardment of the city as a diversion while 2,000 men quietly crept onto Dorchester Heights south of Boston. Virtually overnight they dug a fortified position on the heights where the guns could be placed. On March 5 the British commanders in Boston looked across South Bay to see the new batteries aimed upon the city. There was no taking that position. It would have been Bunker Hill all over again. So General William Howe ordered the evacuation.

A number of British regiments were camped upon Boston Common. When they departed, they left all manner of gear strewn across that open space. We can imagine curious Bostonians picking through the debris when the British were gone. Frugal Yankees, they must have scavenged a good number of useful items.

One such Bostonian was William Hickling, a merchant, roughly 30 years old. He was a patriot who had been out and about on the fateful night of the Boston Massacre back in 1770, though, according to the deposition of Richard Palmes, Hickling went home before the real trouble began.[1] Hickling had been, according to family tradition, rather more active during the Boston Tea Party in 1773 as evidenced by the tea leaves that were found in his shoes the following morning.[2]

Foraging across Boston Common, Hickling probably picked up a number of things. One of them was the white woolen blanket of a British soldier. The “standard issue” blanket, bearing the royal symbol of the King’s Arrow and the initials “GR” for George Rex (or King George) eventually made its way to Duxbury, Massachusetts after William’s death when his widow moved in with her daughter and son-in-law, bringing a number of Hickling family objects with her. The son-in-law was Captain Gershom Bradford, a Duxbury master mariner. Fast forward to 1968, Gershom Bradford’s house, along with a vast number of family belongings, was donated to the Duxbury Rural and Historical Society by the captain’s great-grandsons.

The blanket has, as mentioned above, always been one of my favorite artifacts in the collection. There is little use in speculating what sort of travels this blanket has seen…but it is nonetheless irresistible. Who carried it and to what regiment did he belong? Was he among those that marched out to Lexington and Concord and was the blanket strapped to his knapsack at the time? Or was it possibly carried up the heights beyond Charlestown during the Battle of Bunker Hill? Perhaps the blanket was never carried out during any expedition but was simply employed for warmth in a tent on Boston Common. When the soldier curled up beneath it, what was he thinking about? Home? Family? Getting out of Boston as soon as possible?

Or…perhaps the blanket simply sat in a warehouse somewhere, surplus equipment, and was never used at all. There is just no way to know. But the imagination does indeed run when examining it.