[In anticipation of the 150th anniversary of the Battle of Gettysburg in July 2013, I thought it might be interesting to commence a series of articles, each one devoted to the experiences of a different Massachusetts unit at Gettysburg.]

The monument of the 7th Massachusetts with the statue of VI Corps commander Gen. John Sedgwick in the background.

During the Battle of Gettysburg, the 7th Massachusetts Infantry was part of the Second Brigade (Eustis), Third Division (Newton), of the VI Corps (Sedgwick).

The 7th Massachusetts was among the first of the three-year regiments organized in Massachusetts in June 1861. It consisted almost entirely of men from Bristol County. They trained at camp Old Colony in Taunton, Massachusetts and were mustered in on June 15, 1861. Their original commander was Colonel Darius Couch who eventually rose to the rank of major general and command of the II Corps…one of the highest ranking officers from Massachusetts.

The regiment served with the Army of the Potomac during the Peninsular Campaign, though they were not heavily engaged in any of the battles there. As the Army of the Potomac was transferred to northern Virginia in August 1862, the 7th Massachusetts was again fortunate in that their unit was not shipped until after the Second Battle of Bull Run, and so they were spared that fight. They were held in reserve during Antietam and during Fredericksburg were positioned on the far left, exposed to unnerving artillery fire but emerging relatively unscathed.[1]

Despite the fact that they had seen only minimal combat, they were still hardened veterans having endured tough campaigning. After Antietam, their uniforms were said to be no better than rags. [2] All things considered, though, the 7th Massachusetts seemed to be blessed with good fortune.

That luck ended with the Battle of Chancellorsville on May 1-3, 1863. As part of the VI Corps, the 7th Massachusetts fought in a phase of the battle known as the Second Battle of Fredericksburg. In an attempt to get behind Lee’s lines, the VI Corps took Marye’s Heights west of Fredericksburg (which had been the site of such awful defeat the previous December). Pushing westward to Salem Church, the movement might have been successful in catching Lee by surprise. But it came too late and too slowly to have any significant impact on the overall battle. Nonetheless, the 7th Massachusetts was very heavily engaged at Salem Church and took severe casualties (about 27%).[3]

By the time of Gettysburg, the unit was under the command of Lieutenant Colonel Franklin P. Harlow. 35 years old in in July 1863, he was born in Springfield, Vermont and moved to Abington, Massachusetts as a young man. He had a keen interest in military matters and served in the 4th Massachusetts Militia for 10 years prior to the Civil War. Due to his peacetime militia service, he was commissioned captain of Company K when the 7th Massachusetts was formed.

Harlow was a solid officer and very much respected by his men. The regimental historian described him as an “able and fearless soldier…whose firm and unfaltering fidelity to duty, and reasonable discipline, kept the old Seventh’s efficiency up to a high plane.”[4] He had been in command of the regiment when it was in winter quarters after Fredericksburg, from December 1862 to February 1863 when the unit lacked a Colonel. During the Second Battle of Fredericksburg, as the unit charged Marye’s Heights, Harlow was shot in the stomach. It was apparently not a severe wound as he managed to rally the regiment, shouting, “Forward, forward, boys!”[5] and the 7th Massachusetts went up and over the stone wall which so many brigades had failed to take five months before. With Colonel Thomas Johns being severely wounded, Harlow remained in charge of the 7th Massachusetts for the duration of the Battle of Chancellorsville and ably commanded the unit during the fighting at Salem Church, the worst the regiment had seen during the war. 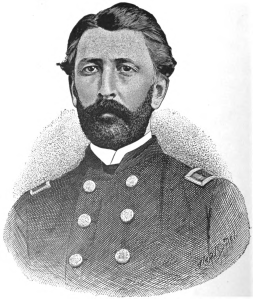 Following Chancellorsville, Harlow remained in command of the unit and the men, “felt the utmost confidence in his courage, fidelity and military capacity, he having shown himself a very cool and splendid officer in action.”[6]

In late June 1863, the Army of Potomac rapidly marched north in pursuit of Lee’s invading army. The VI Corps, including the 7th Massachusetts, did not reach Gettysburg until 4 p.m. on July 2. The battle had already been raging for a day and a half. The VI Corps had something of a late start and consequently marched harder and faster than most Corps of the Army of Potomac in their effort to reach Gettysburg.

In the days preceding the battle, they marched about 20 miles each day. On July 1, with the battle underway and the officers receiving orders to move to Gettysburg at all possible haste, the 7th Massachusetts marched through the night and most of the following day, trudging 37 miles. “Boys, do your best. We must reach the field. The brave army needs you,” said the officers. They finally reached Gettysburg and halted for a rest at Rock Creek on the afternoon of July 2, behind Union lines not far from Big Round Top. There they happily had a chance to fill their canteens. They had marched about 160 miles in two weeks, through terrible heat, and would remember it as one of the most trying experiences of the war.

While the VI Corps rested, the left flank of the Union army was subjected to a massive Confederate assault in the late afternoon and evening of July 2. The III and V Corps were all but shattered. And so the call came to the reserve troops. Eustis’s Brigade, to which the 7th Massachusetts belonged, was ordered forward.

Despite their exhaustion, “Almost as if by magic they sprung to their feet with a cheer on their lips,” according to the regimental historian. “These tired, hungry, foot-sore men spring forward at the word of command, and swing into line on the double quick.” The arrival of fresh troops on the ridge north of Little Round Top was a significant factor in Confederate General Longstreet’s decision to end the attack on the evening of July 2.[7]

The next day, on July 3, as Lee was massing his forces for the infamous Pickett’s Charge, the 7th Massachusetts, along with the rest of their brigade, was “constantly moving from right to left, under terrific shell fire most of the time, acting as support to different portions of the line…”[8] They moved about on the left of the Union line in the vicinity of Little Round Top, not knowing when or where the Confederate assault would strike. As it happened, Pickett’s Charge landed on the center of the Union line and the 7th Massachusetts was again fortunate in their position. They did not fire a shot that day.[9]

On the night of July 3, with the battle over, Eustis’s brigade (including the 7th Massachusetts) was ordered to entrench in the unlikely event that the Confederates would renew the attack on the following day. Without tools, they dug in with bayonets, tin plates and tin cups.[10] No attack came. Lee’s army was shattered and retreated.

Being the reserve troops and fresh as compared with those that had been through intense combat, the division to which the 7th Massachusetts belonged was ordered to march in pursuit of the retreating Confederate army. They moved out on July 5. Leaving Gettysburg via the Emmitsburg Road, the 7th Massachusetts marched through ground where horrendous fighting had taken place. “Everywhere lay the debris of battle, thousands of men and horses swollen beyond recognition in the hot July sun, and the stench was almost unendurable.”[11]

Hard marching followed. Day after day of pursuit in drenching rain. The roads became choked with mud and the men compared it to the awful “Mud March” of the previous January. Over the next week, the 7th Massachusetts marched about 35 miles to Funkstown, Maryland and deployed as skirmishers, battling the rear-guard of the Confederate army. But there was no general engagement. Lee’s army slipped away across the Potomac.

Of the 369 men who went into battle with the 7th Massachusetts, only 6 were wounded.