Returning of the Flags 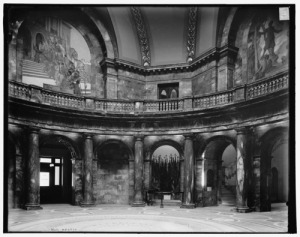 Memorial Hall, c. 1904, in what was then the new State House addition, featuring the Civil War standards that had been installed there just a few years prior to the photo. The mural depicting the Returning of the Flags is in the upper left.

I was at the State House earlier this week for a meeting. I hadn’t been inside in many years. It’s a wonderful building. I had only vague recollections of the marble halls, murals and sculptures,  and enjoyed the opportunity to study the artwork and architecture carefully.

The heart of the building, as far as I’m concerned, is Memorial Hall. The room is the gem of the 1895 addition designed by architect Charles Brigham who had served as a sergeant in the 5th Massachusetts Infantry. Aside from the State House addition, Brigham’s best known work in Boston is the landmark First Church of Christ, Scientist near the Prudential Center. Describing Memorial Hall in 1899 when it was nearly finished, historian Alfred Seelye Roe wrote, “Memorial Hall, whose completion is expected as early as the year 1900, is 57 feet square and has a height of 49 feet. Its adornments will rival those of any similar room in America. Among other objects of interest, it will contain the regimental and national colors, nearly 300 in number, returned to the keeping of the Commonwealth by Massachusetts soldiers who bore them in the War of the Rebellion.”

There are numerous beautiful murals in the Brigham addition. One of them, in Memorial Hall, was painted by Edward Simmons of Concord and depicts the Returning of the Flags which took place on December 22, 1865. Edward Simmons was a great artist, one of the so-called “Ten American Painters” who seceded from the Society of American Artists to protest their increasing commercialism…but I digress…

The Returning of the Flags was the last major effort on the part of war governor John Andrew who left office at the end of 1865. By December, a large number of regimental standards borne in battle by Massachusetts units were in the custody of the U.S. Army’s chief mustering officer for Massachusetts, Brevet Colonel Francis N. Clarke. The War Department had ordered that battle flags be returned to the various states. And so, in Massachusetts, grand plans were made. Governor Andrew decided that these battle flags, and others not yet turned in, should be ceremonially borne by the very men who fought beneath them and returned to the State House following a great parade and pageant.

Most of these men had been out of service for months, but they were called upon to make one last march. The various regiments had long since been decimated by disease, bullets and shells. And there were many veterans who simply weren’t able to attend the ceremony. But, in the end, each regiment managed to muster about 50 to 100 men. They were asked to participate in uniform, “as far as practicable.” The enlistedmen had already turned in their uniforms, but most of the officers still had theirs.

Some of Massachusetts’s most accomplished generals commanded the procession of Massachusetts veterans. Major General Darius Couch of Taunton commanded the overall assembly. The Corps of Infantry was commanded by Major General George H. Gordon. The various divisions of infantry were commanded by Brigadier General Robert Cowdin, Brigadier General Charles Paine, and Brigadier General William Tilton. The procession marched five miles through Boston, from the Common to Quincy Market, then up State Street, down Washington Street to Union Square in the South End, then back around the Common, approaching the State House along Beacon Street from the west.

Among the thousands in the parade, the man who perhaps attracted the most attention was Color Sergeant Thomas Plunkett of the 21st Massachusetts Infantry. During the Battle of Fredericksburg, while carrying the national colors of his unit, a shell burst in front of him, taking his arms and planting shrapnel deep in his chest. Somehow, he still managed to keep the colors from falling until they were taken up by another in his unit. The battle standard being borne during the Returning of the Flags was stained with his blood. The stain is still evident today.

When the remnants of the regiments reached the State House, General Couch presented the colors, addressing the Governor, “You must…pardon us if we give them up with profound regret, for these tattered shreds forcibly remind us of long and fatiguing marches, cold bivouacs and many hard-fought battles. The rents in their folds, the battle-stains on their escutcheons, the blood of our comrades that has sanctified the soil of an hundred fields, attest the sacrifices that have heen made, the courage and constancy shown, that the nation might live…May it please Your Excellency, the colors of the Massachusetts Volunteers are returned to the State.” 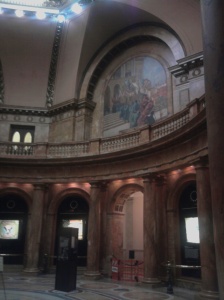 The color bearers then filed into the main door of the State House, which is the scene depicted in the mural in Memorial Hall. Tradition now dictates that the central doors are only opened on three occasions: a visit of the President or foreign head of state, the “long walk” when a Governor leaves office, or the return of a battle flag, which has not happened since the Vietnam War.

Initially, the colors were draped around the columns in Doric Hall, before the Brigham addition was built. Around 1900, they were installed in Memorial Hall and apparently remained there on their original staffs until 1987. How I wish I had seen that! After that, they were moved into climate controlled storage in a sub-basement of the State House…a vault I was fortunate enough to gain access to when doing some research. I have never seen a more awe-inspiring group of artifacts.

I realize it would be logistically difficult…I think impossible to gather a procession so large and impossible to come up with 300 replica colors. But there are enough reenactor units in New England to pull off an impressive and fitting reenactment of this event…not to full scale…but enough. And how wonderful would it be, in conjunction with this, to have even a few of the original standards appropriately exhibited in Memorial Hall?

I know there are many who would like to see an event like this take place. There are still nearly three years in which it could be planned…