Chamberlain’s Medal of Honor Discovered; and How it Got to Duxbury 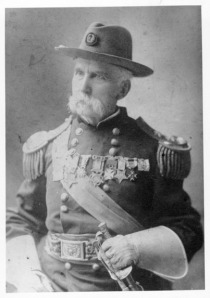 Gen. Joshua Lawrence Chamberlain (1828-1914) late in life. I do believe he is wearing in this photo the Medal of Honor which recently turned up.

Last week, the Pejepscot Historical Society, which operates the Joshua Lawrence Chamberlain house museum in Brunswick, Maine, made a major announcement. They were recently gifted Gen. Chamberlain’s Medal of Honor which had been discovered inside a book purchased at a church book sale in Duxbury, Massachusetts. Just down the street from where I now write. You can read all about it the the PHS website. They have diligently consulted with experts to prove its authenticity. It is the real deal.

Chamberlain is one of the best known figures of the Civil War. The story of the 20th Maine Infantry, which he commanded, and their fight at Little Round Top during the Battle of Gettysburg is possibly the most often re-told episode of any Civil War battle. Chamberlain was awarded the Medal of Honor in 1893 for, “Daring heroism and great tenacity in holding his position on the Little Round Top against repeated assaults, and carrying the advance position on the Great Round Top.” So, what recently turned up was the nation’s highest military award, given to one of the Civil War’s most famed heroes, for action during the largest battle of the war. That combination of superlatives make this small object stunningly significant.

So how did this object end up in the rather quiet, seaside town of Duxbury, Massachusetts?

The news articles mention that General Chamberlain’s last living descendant lived in Duxbury and left her property to the Unitarian church. The PHM website elaborates, “The anonymous donor, who gave the medal to Pejepscot Historical Society ‘in honor of all veterans,’ reports discovering it in the back of a book purchased several years ago at a sale held by First Parish Church of Duxbury, Mass.  Joshua Chamberlain’s last surviving descendant, his granddaughter Rosamond Allen, left her estate to that church upon her death in 2000.”[1]

I’ve known a bit about the history of the Allen family and the Chamberlain connection for a good many years. I certainly had no idea his Medal of Honor was kicking around this town! It is impossible to say exactly how and when the medal came here, but I can provide a little more detail on the Allen family and how the General’s descendants ended up in Duxbury.

Stephen Merrill Allen (1819-1894) was born in New Hampshire and made a fortune for himself in real estate dealings in Boston. He was also a politician, author and historian. In 1870, seeking a spot to build a summer home, he came upon Duxbury. The town was, at the time, coming out of the doldrums and about to experience a Gilded Age shot in the arm, in large part thanks to Allen. Duxbury had been famous for shipbuilding in the early 19th century but all that went bust after the Panic of 1837. A period of depression followed. But after the Civil War, the sleepy town attracted a number of wealthy Boston and New York families who felt its unspoiled tranquility would be perfectly conducive to summer mansions. These summerfolk (perhaps none more so than Stephen Allen) envisioned rampant development…resort hotels, steamboat wharves, and acres upon acres of cottage lots. Allen began to buy up vast amounts of land for cheap money.

The land he chose for his own summer estate was a portion of what had been Captain Myles Standish’s farm (the leader of Plymouth Colony’s militia had been granted land in what would become Duxbury in 1627). The property included an old house believed to have been built in 1666 by Alexander Standish, the captain’s son. A photo of the handsome summer home he built for his family is in the collections of the Duxbury Rural and Historical Society and can be viewed here. This is the home that General Chamberlain, in time, would visit fairly frequently. Sadly, the house no longer stands. 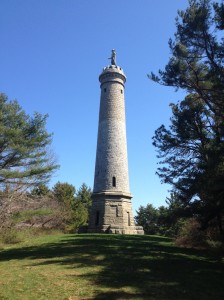 Allen set some major development schemes into motion in Duxbury. A resort community needed attractions. Allen was the driving force behind the formation of the Standish Monument Association. The group of investors planned a towering monument honoring Standish atop Captain’s Hill, close to Allen’s estate. Allen acquired the hill and work was begun in 1872. Unfortunately, the Panic of 1873 destroyed most of Allen’s schemes. Much of the land he planned to develop was taken in foreclosure. And it would be almost 30 years before the Standish monument was completed due to lack of funds. Allen died in 1894, four years before it was finished.[2]

His son, Horace Gwynne Allen (1855-1919), a successful Boston attorney, inherited the Duxbury estate. In 1881, Horace had married Grace Dupee Chamberlain (1856-1937). I haven’t yet been able to thresh out the details, but somehow Stephen Allen and Joshua Lawrence Chamberlain met and became good friends. And thus their children married. General Chamberlain and his wife Frances had five children, but only two survived to adulthood–Grace (or “Daisy” as the General called her) and Wyllys. Grace was the only one to bear children of her own, the General’s granddaughters, Eleanor (1893-1973), Beatrice (1896-1941) and Rosamund Allen (1898-2000). Daisy adored her father and the two had a strong bond. He therefore came to Boston and Duxbury frequently to visit her and his grandchildren.

I have stood on the beach of the former Allen estate many times and tried to envision the Hero of Little Round Top, an aging General Chamberlain, strolling there with his granddaughters. From the estate, he would have been able to see the Myles Standish Monument and I am sure he was aware that he was walking upon land originally owned by the Pilgrim captain. I wonder if he, in turn, tried to envision Myles Standish walking the same shore.

Rosamond Allen, being the last of Chamberlain’s descendants, was interviewed for various magazine articles in the late 20th century. During one interview, she recalled, “We children called him Gennie because we couldn’t pronounce ‘general.’ For all the fact that he was famous, he was very gentle—just the opposite of pompous.”[3]

“Gennie” died in 1914. His Brunswick, Maine house passed to his daughter, Grace Allen, and then to his granddaughters when Grace died in 1937. They sold the Chamberlain house in 1939. Apparently, before the house was sold, some of Chamberlain’s belongings (I suspect a good many) were brought to the Allen estate in Duxbury. I would bet that the Medal of Honor is not the last Chamberlain artifact that will turn up in the Duxbury area, although I am sure it is the most significant.

As for the Allen estate in Duxbury, the granddaughters divided it in three parts in 1939. Oldest daughter Beatrice got the largest share, including the old Alexander Standish house. She died there in 1943. Eleanor Allen willed her portion to the Duxbury Rural and Historical Society. Rosamond gifted her portion to a regional Unitarian association (not the First Parish Church of Duxbury as most of the articles have stated).

I started working in Duxbury in 1998 when Rosamond Allen was still alive. She had moved to Florida decades earlier and no longer had any ties to Duxbury. I never met her, though I wish I had. It is strange to contemplate the fact that the Civil War, though it may have occurred 150 years ago, is really not all that far removed from us.

Thank goodness the anonymous donor decided to donate Chamberlain’s medal. It always pains me when such objects end up at auction, passing into private hands and possibly into oblivion. How wonderful that this object has found its way home and can be seen and appreciated by the public for all it represents.