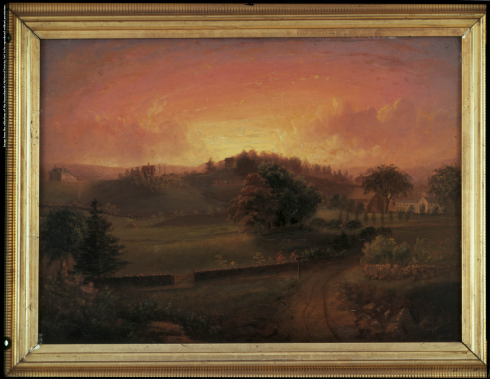 A view of Brook Farm by Josiah Wolcott, c. 1844. From left to right the buildings are Pilgrim House, the Cottage, the Aerie, and the Hive. Collections of the Massachusetts Historical Society

Brook Farm, located in West Roxbury, Massachusetts near the Charles River, was an experimental utopian community inspired in large part by the Transcendentalist movement. It operated from 1841 to 1847. A large cast of fascinating characters were involved, either as actual shareholders and residents or as frequent visitors, including George Ripley (the leading figure behind the community), Sophia Dana Ripley, Margaret Fuller, Nathaniel Hawthorne, Bronson Alcott, Elizabeth Peabody and Theodore Parker.

One of the early participants, among the lesser known, was Ichabod Morton of Plymouth. As he is from my neck of the woods, I find it intriguing that Plymouth was well represented in the experiment. Although he was there only for a short time, he made a significant contribution to the community. And his daughter, Abby Morton Diaz, would remain there for years working to support the endeavor.

Ichabod Morton was born in 1790 in Plymouth, a descendant of George Morton, one of the Pilgrim settlers who arrived in 1623 on the Ship Anne and the publisher of the famed Mourt’s Relation, an early history of Plymouth Colony. Ichabod Morton became a merchant, owned a general store in Plymouth, and operated (in partnership with his brother Edwin) a small fleet of vessels engaged in fishing and coastal trade.[1] His house, an old gambrel roofed Cape, still stands a mile south of Town Square.

Morton was among the first in Plymouth to become inspired by the spirit of social reform sweeping New England in the 1820s and 1830s. He and his brother took up the cause of temperance and would not sell liquor from their general store. He became an early leader of antislavery in Plymouth, actively supported abolitionist meetings and sought to bring leading antislavery speakers to town. He was especially enthusiastic about educational reform, advocating for new schools in Plymouth and increased appropriations for education. He was among the first supporters of the Bridgewater Normal School, now Bridgewater State University.[2]

Ralph Waldo Emerson described Morton as, “plain man, formerly engaged through many years in the fisheries with success, — eccentric, with a persevering interest in education, and of a very democratic religion.”[3] His daughter, Abby Morton Diaz, who would follow in his footsteps to become a notable activist in her own right, described her father as:

…Earnest in bearing, usually of serious aspect and much given to planning for the kingdom of heaven to come on earth, and to freeing people from the cruel old-time orthodoxy. In his meditative moods, or when he was singing the old hymns to the old tunes, his countenance often assumed a rapt expression, consequent upon a remarkable experience which befell him one night in his young manhood. When away from home on business, his room in Boston was supernaturally lighted and he was given a vision of the state of the world as it would be when conducted on the plan of human brotherhood; and he then and there promised the devotion of his whole life to the work of making this vision a reality.[4]

By the sound of it, if anyone in Plymouth were to be interested in the Brook Farm experiment, it would be Ichabod Morton. 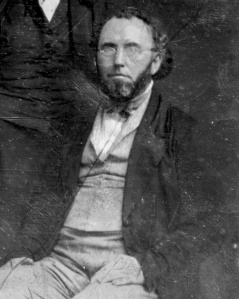 After the Panic of 1837 and the subsequent economic depression (the worst in the young nation’s history) George Ripley, minister of Boston’s Purchase Street Church and a founding member of the Transcendentalist Club, became increasingly concerned with the plight of the poor. He had long been interested in socialism. That year, he gave a sermon on, “The Temptations of the Times,” suggesting that the major problem in the country was “the inordinate pursuit, the extravagant worship of wealth.”[5]

Members of his congregation asked Ripley to avoid such topics. Ripley responded, “Unless a minister is expected to speak out on all subjects which are uppermost in his mind, with no fear of incurring the charge of heresy or compromising the interests of his congregation, he can never do justice to himself, to his people, or the truth which he is bound to declare.” The conflict led him to resign his pulpit in 1840. He immediately began organizing a community which would almost completely do away with gender roles and in which all shared the work and profit. By April 1841 he had twelve investors and purchased a dairy farm in West Roxbury later that year. “If wisely executed,” Ripley wrote, “it will be a light over this country and this age. If not the sunrise, it will be the morning star.”

Activities at Brook Farm were broad in scope and included a progressive school which became quite successful, attracting enrollments from some elite families of Boston and beyond. It was apparently the school that first brought Ichabod Morton to Brook Farm. He arrived in the spring of 1842 with his two sons and his daughter, Abby. He was likely looking to enroll his sons in the school.[6] He was so inspired by the community that he set about building a house on Brook Farm–what might be called a duplex–intending to recruit his brother Edwin and provide a commodious living space for both their families. The structure was dubbed, “Pilgrim House.”

It was quite large, containing 13 bedrooms overall, and built at a cost of $5,000 which the association would owe to Morton. Although pleased to have his support and the addition of such a structure, the debt would hang over the association and cause some anxiety as the experiment struggled.[7] Morton, however, showed great patience and waited many years before the debt was repaid by Ripley. Many of the Brook Farmers took to Morton as quickly as he had to them. In the summer of 1842, Brook Farmer Georgianna Bruce wrote of Ichabod Morton to a friend, “You would like Mr. M. He looks just as you can fancy the most loving of the Puritans looked, and really is one, divested of all their superstition and bigotry.”[8]

It is not clear how many members of Morton’s family actually occupied Pilgrim House or for how long. Ichabod Morton was there for a brief time in early 1843. Certainly his daughter Abby, who came as a teacher and eventually had charge of the Brook Farm Infant School, was there and possibly his sons. It seems his brother Edwin, despite his reformist views, never took much interest in Brook Farm and did not occupy his half of Pilgrim House as planned.

Ichabod Morton ended up leaving Brook Farm after a short stay, perhaps as brief as two weeks. According to historian Sterling Delano, his departure may have been due to his discomfort with a romantic relationship between Abby and another Brook Farmer Manuel Diaz.[9] One of several international students, Diaz had come to Brook Farm from Cuba and eventually settled in as a member of the association. He married Abigail Morton in 1845. Offering a different theory on Ichabod Morton’s sudden departure, an earlier historian, Lindsay Swift, wrote that Morton left, “because he felt that sentiment rather than good business judgment governed the practical affairs of the Farm.”[10]

Thus vacated, Pilgrim House was given over to the general purposes of the association. One Brook Farmer, Amelia Russell, was obliged to move in to Pilgrim House as the community grew. She was not pleased with the change and her description of Pilgrim House is accordingly somewhat harsh:

Neither externally nor interiorly [sic] did it possess much attraction. Having originally been intended for two families, it had none of the quaint appearance of even a common country house. It was very much like two houses placed dos a dos instead of side by side, and was a very uncouth building, with many rooms in it which were useful for our increased numbers, but did not satisfy an eye for symmetrical proportions. Among them were two large parlors, joined by folding doors, which became our ballroom whenever we were inclined for a dance, and were occupied on all convivial occasions…The Pilgrim House was placed in a very barren spot, with no trees near it, and altogether the change was not pleasant to me. I had always lived at the Cottage, which was in itself a beautiful little home, and I had become attached to it. Of course I must yield my own personal comfort for what was thought to be advantageous for the good of the whole.[11]

Another Brook Farmer, John Thomas Codman, called it the “least attractive house on the place.”[12]

However “uncouth” it may have been, Pilgrim House, given its size, was quite useful in providing housing for members of the association and for students of the Brook Farm School. The members removed the wall separating the two kitchens and created a single, large one which became the primary laundry facility. This work space, Russell conceded, “…was a very pleasant, cheerful place, at least inside, and we forgot its lonely exterior in the merriment with which we filled it.”[13] The double parlor of Pilgrim House was used for many purposes in addition to the dances described by Russell. It was a place for discussions and lectures by prominent speakers. Pilgrim House also provided office space for the literary publication of Brook Farm, the Harbinger. 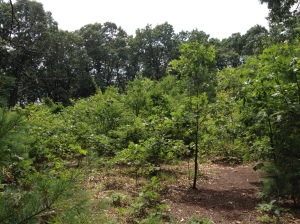 After the collapse of Brook Farm in 1847, the property was eventually purchased by Gottlieb Burkhardt who established the Association of the Evangelical Lutheran Church for Works of Mercy. The organization operated an orphanage on the site from 1872 to 1943. The site is now owned by the Commonwealth of Massachusetts. In 1991, an extensive archaeological dig was conducted at Brook Farm led by Steven Pendery, then Boston’s city archaeologist. Many things might be said about the findings of this dig, but specifically with regard to Pilgrim House, Pendery speculated that the structure may have been moved during the orphanage days to serve as the main administrative building. What happened to it after that is unclear.[14]

Visiting the site of Brook Farm today is a strange experience. Two large cemeteries now border the location of Ripley’s utopian experiment. The ridge upon which most of the Brook Farm buildings stood, including Pilgrim House, is overgrown and rather forlorn. A narrow footpath winding through the brush allows one to walk the same ground as the Brook Farmers. Vaguely flat spaces suggest where the various buildings were.

According to their brochure on Brook Farm, the Department of Conservation and Recreation, in coordination with the Boston Landmarks Commission and the West Roxbury Historical Society, is developing an interpretive plan and awaiting funding from the Commonwealth. I hope it comes soon. There is great potential to once again make the farm a beautiful space and to promote a cultural site of enormous importance.